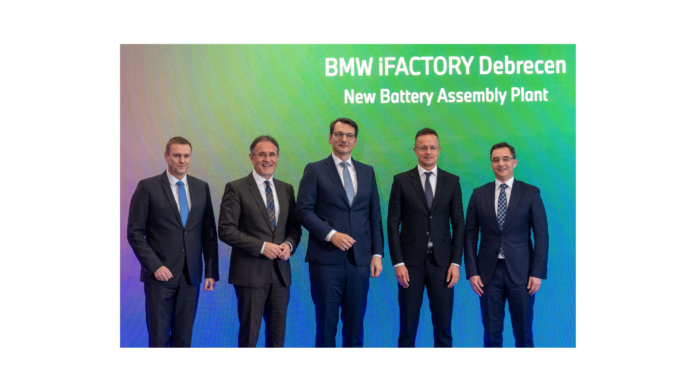 The BMW Group is building a high-voltage battery assembly for the vehicles of the NEUE KLASSE at its site in Hungary. The battery assembly will be located on the site of the Debrecen vehicle plant, which started construction about six months ago. The company will create more than 500 additional jobs and invest over two billion euros in the construction and launch of the entire plant by the end of 2025.

Milan Nedeljković, member of the Board of Management of BMW AG, Production, said: “In Debrecen, we are building the most advanced plant in the world. With our iFACTORY, we are setting new industry standards for vehicle production. Our investments underline our systematic approach to implementing e-mobility.”

The new announcements were also welcomed by the Hungarian government. Peter Szijjarto, Minister of Foreign Affairs and Trade of Hungary, said: “The BMW Group plant in Debrecen is a symbol of the successful Hungarian economic policy of the past twelve years. The plant combines environmental protection and competitiveness, and that is much more than we have originally planned.”

“We are currently recruiting new colleagues locally and from all over Hungary, so we can build the future of BMW Group Plant Debrecen together,” explains Hans-Peter Kemser, President and CEO of BMW Manufacturing Hungary Kft. The plant, together with local partners in education, will launch a dual education programme in autumn 2023 at its in-house Training Centre.

Laszlo Papp, the Mayor of Debrecen, emphasised the role of the BMW Group for the city: „With its investment in Debrecen, in addition to creating new jobs, the BMW Group makes a long-term commitment to the community of our city. We are building a thriving future together.”

The assembly of high-voltage batteries will be located on the site of the Debrecen vehicle plant. Markus Fallböhmer, Senior Vice President of Battery Production at the BMW Group, explains: “The BMW iFACTORY is also about ensuring short distances for logistics. The close link between battery assembly and vehicle production is part of our strategy.”

In Debrecen, the next-generation round battery cells will be assembled into a battery housing – a metal frame, which is later integrated into the underbody of the car. The official start of production for the sixth generation high-voltage batteries will be in 2025 – in parallel with the start of vehicle production. All batteries for the vehicles from Plant Debrecen will be assembled on site. The new production facility will extend over an area of about 140,000 m². Construction work recently began.

The battery is decisive for the competitiveness of electric vehicles. With the next generation of batteries for the NEUE KLASSE, range will improve by up to 30 percent, and the charging speed will be up to 30 percent faster.