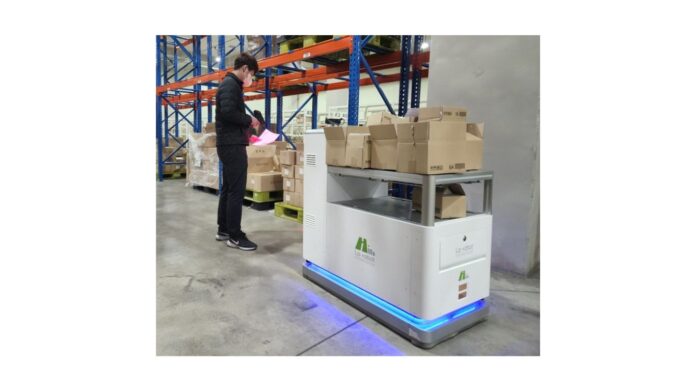 Hills Robotics (CEO Park Myung-gyu) is an autonomous robot hardware & software company established in 2016. Since 2021, the company has been promoting joint R&D for autonomous driving with KAIST, a major domestic research institute, and received the CES Innovation Award last year and this year.

The main product, the self-driving logistics robot ‘Lorobot’, is a SLAM-based autonomous driving solution that can be operated without external markers. The robot’s path can be set in advance, and the robot can be operated flexibly as it can be ordered to follow the operator as needed.

The solution developed by Hills Robotics leads to 2D “LIDAR,” autonomous driving performance comparable to general 3D “LIDAR”. In this way, the cost of sensors, which accounts for a large portion of the robot price, can be reduced, thereby lowering the robot price.

In addition, through preventive stop support based on empirical data and remote update based on logistics expertise, the additional cost associated with robot operation is reduced and operational effectiveness can be improved.

Hills Robotics currently has joint R&D and business cooperation with tech companies in Silicon Valley and Israel, and is promoting joint R&D for robot development with major domestic and foreign research institutes such as Flanders Make in Belgium. In addition, the company’s main product ‘Lorobot’ has a contract with Indonesia’s purchase order.

In addition, the company is preparing to enter the global market by targeting three types of cooperation targets: end clients who operate fulfillment centers, warehouses, and logistics centers, overseas maintenance partners, and companies that can become the overseas agents.

An official of Hills Robotics said, “Our company has raised 100 million won through seed investment and is currently in the process of pre-series A investment. Robot sales recorded more than 200 million won in the first half of this year.” He added, “We have quickly accumulated references by targeting domestic and foreign markets at the same time, and we expect that mutual synergy between references will help accelerate sales. Also, in the mid- to long-term, we plan to provide various services to support unmanned logistics centers.”