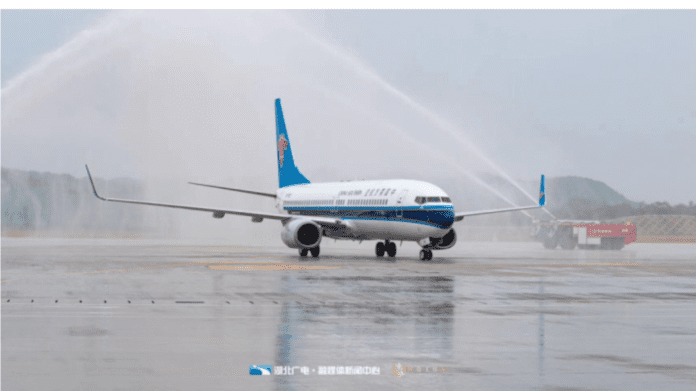 The Ezhou Huahu Airport in Ezhou city, central China’s Hubei province, which is the first professional cargo hub airport in Asia and the fourth of its kind in the world, recently began operations.

Both flights passed a welcome water gate, the highest courtesy of civil aviation, after arriving at the airport.

As an international air cargo hub, the airport’s air route network covers the entire country and destinations across the globe. With its 1.5-hour flight circle reaching the country’s top five city clusters and covering 80 percent of the country’s population, passengers and cargos departing from the airport can arrive at major airports of the country in one night and major foreign airports the next day.

The airport has adopted a wide range of cutting-edge smart technologies and applications, enabling passengers to pass identity verification, explosives detection, and temperature measurement at one security checkpoint in three to five seconds.

Three of the six security checkpoints in the terminal of the airport are smart checkpoints that allow passengers to board the plane in the shortest time.

International cargo routes between Ezhou and foreign cities, including Osaka in Japan and Frankfurt of Germany, are also expected to be launched within this year.

By 2025, the airport will have opened about 10 international air cargo routes and around 50 domestic routes. Meanwhile, its cargo and mail throughput will hit 2.45 million tonnes; and it will handle one million passenger trips annually. The figures are expected to rise to 3.3 million and 1.5 million, respectively, by the year 2030.

Moreover, after the third runway of the airport is put into use in 2050, the airport will be able to handle 20 million passenger trips, 9.08 million tonnes of cargo, and 270,000 incoming and outgoing flights a year.

Located in the geometric center of the cities of Ezhou, Huangshi, and Huanggang in Hubei province, the airport is only about 20 minutes away from the downtown areas of the three cities by car.

Shuttle buses connecting the airport with railway station and bus stations in Ezhou, as well as expressways linking the airport and multiple cities, have all been opened simultaneously for the convenience of passengers and cargos.

The airport is expected to play a significant role in boosting the industrial development of its surrounding cities and facilitate air passenger and cargo transport in China as well as the world.